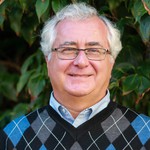 Mr. Freire completed his undergraduate studies at the University of Toronto, and pursued post-graduate work at Trinity Western University and St. Mark’s College. He began his career in secondary education in the Toronto School Board, teaching both Mathematics and Computer Science over a period of nine years. In 1983, Mr. Freire joined the staff of Vancouver College, where he remained until 2016. While at VC, he served as the Head of the Mathematics Department for 18 years, and taught all the math courses in the senior school, including Advanced Placement Calculus. He also taught a number of Religious Studies courses at the grade 10, 11 and 12 levels. He is a recipient of Vancouver College’s prestigious Pro Operis Award, “presented in acknowledgement for extraordinary generosity and dedication in service over many years to the Catholic education of youth.” Mr. Freire is married to his bff Gail; they have three children and six grandchildren.