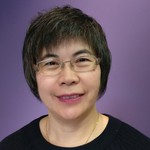 Dr. Grace Lee was a professor at City University of Hong Kong for twenty years before she migrated with her family to Canada in 2010. Her teaching and research interests are in labour markets, employment policies and public management. Dr. Lee had published five books, and over ninety publications including internationally refereed journal articles, book chapters and contract research reports.

Active in leading Catholic faith studies, Dr. Lee has been involved in the Cantonese Bible Study at St. Francis Xavier (SFX) Parish since 2014. In 2016, Dr. Lee delivered an 18-hour course on "God's Project for Humankind" over a period of six weeks at SFX, which was well received by more than one hundred participants.In 2018, Dr Lee published a book "Be Holy" in Chinese. In 2019, the Kerygma was proclaimed in a lecture "Be God's Witness" with illustrations from Michelangelo's paintings in the Sistine Chapel (pictures captured from Bishop Baron's "WORDonFIRE"), featuring a 3-minute video clip from Cardinal Tagle's "The Word Exposed". Videos of the lecture has been uploaded on YouTube: Parts 1 and 2 - https://youtu.be/L9OpIMdgfZM, https://youtu.be/Q_swwP_ZJq4

Grace O M Lee and Malcolm Warner, "The impact of SARS on China's human resources: implications for the labour market and level of unemployment in the service sector in Beijing, Guangzhou and Shanghai," International Journal of Human Resource Management, 17: 5 May 2006: 860-880.